What better way to celebrate 103 years of ski mountaineering in North America than to recreate the event. Slide Mountain doesn’t get great winter snowfalls often anymore, so the recent “snowicane” seemed like the best time to make it happen.

Irving Langmuir pushed deep into the snowy Catskills by train, sled and skis to knock off the highest peak of the range almost exactly 103 years ago. The event marked the first recorded act of successful ski mountaineering in North America.*

Ski Mountaineering is being defined here as a recreational and intentional ski from the summit of a significant peak (significant meaning over 3000’ vert) using “modern” ski turning techniques developed in the Arlberg Mountains of Austria. Without the modern turns, steeper terrain was not possible to ski in a skilled (or sane) manner.

Langmuir had just spent his college years in the Alps learning skiing from the small communities that developed the Arlberg Technique (later organized and published by Hannes Schneider).

The Brooklyn native was a young chemist and physicist who loved skiing almost as much as he loved inventing world-changing inventions (like cloud-seeding, non-reflective glass coatings, a better light bulb and other things that lead to a Nobel Prize). At the time of skiing Slide he was an energetic employee at the Stevens Institute of Technology in Hoboken, NJ, eager to test out his new Alpine ski gear (big wooden skis!) and skills on the unskied summits of New York State.

Langmuir hopped on a steam train bound for the town of Phoenicia and likely started the human-powered ascent of the trip from 900’ elevation at the train depot. After reaching the summit of 4180 feet he skied down over 3000k of mountain.

The young man would go on to become an agent of change in the skiing community influencing John Apperson and other conservationists. They would ski (first descents) many of the highest mountains in the state and the greater Northeast, sometimes sleeping in stone huts above treeline taking scientific measurements.

*This being said it is important to note that people had attempted unsuccessfully to ski from Mt. Washington’s summit starting in 1899. Langmuir had taught John Apperson to ski after 1907 and Apperson was the first skier in Tuckerman Ravine in 1914. Apperson was connected to the famous Dartmouth Outing Club which focused on first descents in the White Mountains and Mt. Katahdin.

When 20+” of snow falls in Central Park, NYC, you know that it will be a good day in the Catskills.

The “Snowicane” of February 2010 dumped many feet of snow over two days. How much? I’d estimate 8’ at 4k’ elevation, but it could have been 5’, it didn’t matter. All we know is Rip Van Winkle fell asleep at the snowmaking machine in the sky for two days before he woke up and realized the thing had been set to max. We didn’t know Langmuir’s exact route on this day, but we took a guess he started from the Winnisook Club and the most popular trail up the peak which followed an old road. Historical maps showed a road going up from the Phoenicia direction over a pass down to the historic Winnisook Club which did exist at the time, although it was likely not manned in the winter.

A lot of these peaks had logging roads which turned into access roads for the fire towers, we followed one of these grown-over access roads. Langmuir likely would not be limited to roads or trails in 1907 as the Catskills had been recently denuded by the tanning industry.

The great hemlock forests which covered the peaks contained the tannin acid in the bark and the old growth forests had been killed by “bark peelers” who removed bark from any tree over 14” wide and shipped it to nearby tanning factories. The slash and refuse left by the operations in the forest made it easy for forest fires to spread, destroying the remaining trees. While the tanning industry had collapsed decades before, the forests likely still had large bald areas and many more rough steep roads for Langmuir to ski than the densely covered mountain we see today. 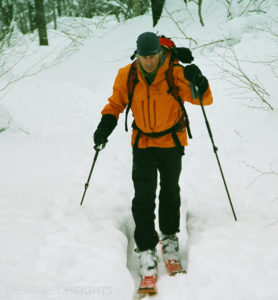 Sierra style snow in the Catskills

Ron and I skinned up through deep heavy powder and hardwood forests. Breaking trail was tough but the thought of enjoying the soft snow on the way down kept the stoke up. Many smaller trees laden with snow arched over the path, making progress slow through tangled broadleaf thickets. The area above 3500’ was a winter wonderland with enormous spruce branches completely bent over and connected with the ground. Navigating took effort as any sign of the trail was gone (two weeks later two men died on Blackhead Mountain after getting lost in another snowstorm, so the snow had thoroughly erased trails up high).

Ron Konowitz is one of the most experienced backcountry skiers in the state having skied in the highest, steepest and most remote sections of the Adirondacks since the 1970s, although he had never skied in the Catskills before this. I had a few great days in the Catskill backcountry before, but never had seen this kind of snow. 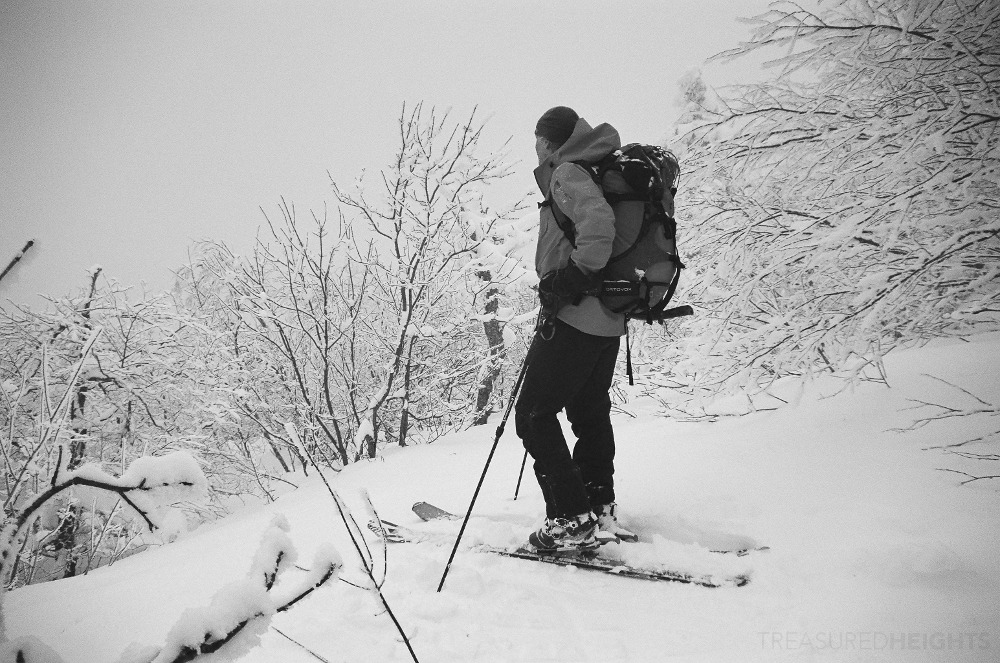 While the grey clouds and storm continued above we reached the meadow that marks the summit of the peak. Here the powder was dense enough that we could ski down the low angled ridge without sinking too deep.

There were some fun moments cutting turns in little open spots where the angle was steep enough, but the majority of the trail was slow until we reached the point when the slope dropped off. Here Ron enjoyed powder turns through open hardwood forest. This section was unfortunately too short and we hit the lower slopes of the mountain with lower angles. 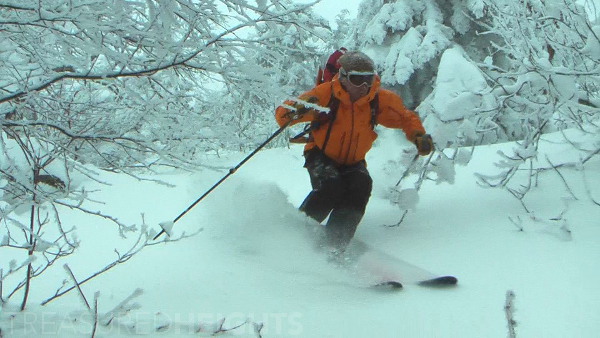 We finished in the dark arriving at a snow-covered road. I took my skis off and wallowed in bottomless snow trying to climb over the final snowbanks.

A Recreation, but not a Re-creation:

Did we recreate Langmuir’s ski exactly? Unfortunately not. We missed taking his route, and the best terrain on the mountain. Months later after talking with a historian who is preparing a book on ski history I got more information and found out he took the Woodland Valley up over Wittenberg Mountain to get to Slide. Whether he chose the steeper line down into the Sundown Wild Forest, or back up over Wittenberg it is unknown. In this day and age Wittenberg would be a fun ski in clear weather as it has good viewpoints, something rare on many Catskill peaks. The best line on Slide for modern skiers would be a direct ski down a NE landslide scar, as long as it hasn’t grown over with small trees yet.

While some people do backcountry ski in the Catskills, the problem is consistent snow. These peaks can get walloped with storms off the Atlantic nearby, but unfortunately they don’t get near the snowfall as the Adirondacks 150 miles north of here. For the Skiing States project I had to wait until a rare 18″ snowfall on Conneticut’s Mt. Frissell in order to ski the state highpoint.

The Catskills do have some really cool terrain for good snow years, some of which offer more than 3000k of vertical. The peaks as seen from the Hudson Valley reveal their complex and plentiful layers of sandstone cliffs which could make for fun obstacles when the snowpack is greater than 4’.

Yes, most of the Catskill Mountains are protected by New York State’s robust environmental laws preventing the extraction industries from coming back on public lands in the Catskill and Adirondack Parks. When it comes to conservation New York gets a good grade, however there is still a lot of private land in the Catskills which needs protection. The greatest threat to these mountains are the construction of roads and expensive private homes which litter some of the mountainsides like trash, especially close to commercialized ski areas. More should be done to stop development on steep or high terrain on private lands. Backcountry skiing is not a designated legal use in the Catskills so you will not find glades and trails designed for this. All the skiing outside of the lift-serviced ski areas is wild and requires solid skills in thick forested terrain.

The deep consistent snowy winters of Langmuir’s era in the Catskills have changed, but be on the lookout for good winters in the future to bring this place back to life.

Here is a video of that day:

The White Mountains, the Alps of New England
By Randall H. Bennett

The Quintessence of Irving Langmuir
By Albert Rosenfeld

See a weekly stream of photos from Treasured Heights of backcountry skiing and splitboarding from around the US on Facebook or Instagram.