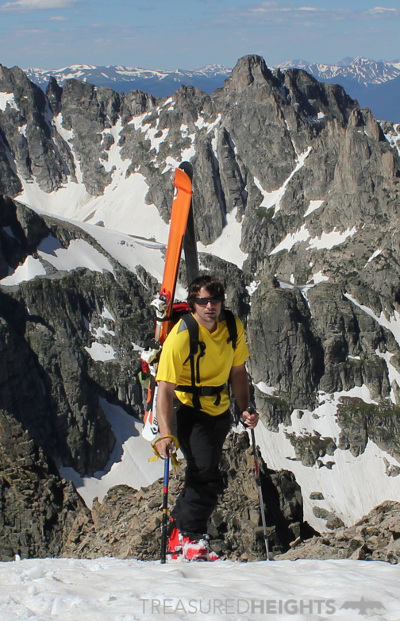 Founder of Skiing States: Mike Whelan: Since 1995 Mike has been hiking up hills, peaks and canyon walls to get turns. He currently is based out of Colorado.

Mike grew up in the rural Northeast US learning to ski after school on farm fields, wooded ravines and small ski hills nearby. By 2003 he had skied in the Andes, Himalaya and was living in Eastern Europe’s Carpathian Mountains.

In 1998 Mike began a project to ski the high points of the Northeast shooting on VHS-C video tapes. In 2013 he applied the same goal to include all snowy-state high points in the lower 48 states. Many Midwestern hills and points were a joy as it allowed him to discover places like the great wilds of upper Minnesota, the North Dakota Badlands, and Michigan’s great woods. He’s been cross-country skiing since 1985 and enjoys all forms of skiing, both steep, and tranquil.

Mike has worked in television and film since 2001. He has worked for most US national television networks and worked in the film industry in Romania and the US. Many freelance projects were for non-profits, ranging from schools in India, to exposing corruption and oil companies in the Amazon rainforest.

Skiing States touches on skiing, public lands issues and Native American rights as these are subjects that Mike has been working with in other nations for years.  Most importantly Skiing States is about spreading the joy of human-powered natural skiing which can benefit people in all snowy places.