Eastern Oregon is a cool place to explore on skis. The region also has a rich history which colors some of its activist residents. The area is one of the hot spots for the struggle to protect our public lands.

Eastern Oregon is drier than the western side of the state and is a mixture of sage-filled dry valleys and large forests. The area belongs to the Nez Perce, Cayuse, Sahaptin, Moses Columbia and Northern Paiute tribes, but has been occupied by white settlers ever since 1810.  Fur traders established the Oregon Trail through this region on their way to the lush farmland of Eastern Oregon. From the mid 1830s until 1870 almost a half million settlers moved through, and some chose to stay close to Baker City below the Elkhorns and Wallowa Mountains.

Fast forward to today, the area is still rural with large sections of national forest. In 2008 there was an effort by many in Eastern Oregon to secede from the United States and form a new state due to political differences with Western Oregon.  Southwest of the Elkhorn Mountains is the town of Burns, Oregon, site of the infamous occupation of the Malheur National Wildlife Refuge in 2016 by terrorist Ammon Bundy. Many of the locals have distanced themselves from this drama, however pockets of activists exist in the region.

Some in the area hold a belief that they are entitled to take and control millions of acres of Oregon’s federal lands (and simultaneously ignore Native American rights to their ancestral lands). This movement involves giving away or selling our public lands to industry and wealthy investors, which is an exact repeat of the way things were done in the late 1800s.  The movement is backed on the grass-roots end by low-income locals with an anti-fed attitude, and it’s backed from above by the American Legislative Executive Council – a Koch backed dark money organization that takes donations from heads of industry and uses the money to fund anti-public lands politicians. Caught in the middle are Oregon residents who have some genuine grievences with past federal land management regulations or actions, but don’t support the militant militia groups.

The extraction industry funds the conservative anti-fed movement however has been the reason for the movement in the first place. One of the most irritating actions by federal government has been eminent domain. When mineral rights are sold in Washington by the Bureau of Land Management, locals are powerless to stop energy companies from messing with private property rights on the surface. This stokes the local rule movement. In the current administration the massive hypocracy has been with Ryan Zinke, the Secretary of Interior who has sold off more mineral rights in 2017 than we’ve seen sold in a long time. Extraction industries care about access to federal land by any means possible, they also could benefit from land transfer to states. Grass roots anti-fed movements are mearly pawns to justify parasitic economic operations.

A long history of land grabs:

One can look at the militia and anti-government activists as a new problem, however it has deep and complicated roots. The arrival of East Coast settlers to Oregon involved the colonialization of the most fertile lands first. These lower elevation river valleys such as that around Baker City were winter locations for the area’s tribes over thousands of years. The US Cavalry and state militias carried out brutal operations to remove the tribes from the the prime lands, forcing them to retreat to more dry or high areas with long winters. East Coast elites funded the railroad and extraction industry operations in the later 1800s which led to pushing Native Americans out of even the less desireable farm lands.

The famous Nez Perce “Trail of Tears” lead from Wallowa Lake in Eastern Oregon and ended in Montana. Travelling throughout the west I have crossed this trail again and again. In this event the 7th cavalry attempted to force the Nez Perce people from their homeland onto a reservation. They refused, and fled on a tragic journey of epic proportions across the most stunning wild mountain terrain in the Rockies. The U.S. cavalry attacked 800 tribesman at Big Hole National Battlefield and massacred women, children and men. After that they hunted down the starving people across several states. Chief Joseph delivered a speech of defeat just 40 miles from the Canadian Border.   I will describe more of this in a future blog post on the trip to the Beartooth Mountains of Montana/Wyoming.

Back to skiing in the Elkhorn Mountains > 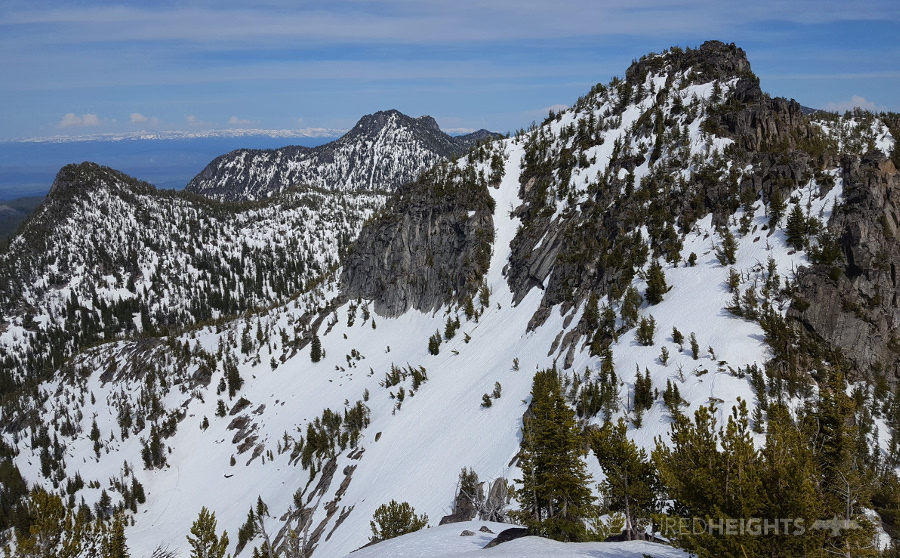