Never heard of the Elkhorn Mountains? Neither have most backcountry skiers. This beautiful  range rises above a verdant valley in the wild east of Oregon. Along the old Oregon trail these highlands provide a snowshed for the valley with sharp sided buttes and ridges that hold snow until June.

The Elkhorn Mountains are a natural stop along I-84 on the way to or from the Pacific Northwest, but rarely anyone stops there (compared with most well-known ranges of the West). There are no major ski areas here, no national parks, no tall peaks, just a simple 9000’ set of cool mountains with deep valleys.

As one drives along the highway white snowy peaks and mysterious valleys create an enticing view to the west. Many people see it and think “hey, those look cool” and keep driving to bigger and more famous peaks in the Cascades or Sawtooth Mountains.  One trip I did get the time to stop and check out this wild highland.

A vast land of beauty, tragedy and nut-jobs:

Eastern Oregon is drier than the western side of the state and is a mixture of sage-filled dry valleys and large forests. The area belongs to the Nez Perce, Cayuse, Sahaptin, Moses Columbia and Northern Paiute tribes, but has been illegally occupied by white settlers ever since 1810 when fur traders established the Oregon Trail. Learn more about the Elkhorn’s history and modern-day anti-public lands issues on another article here.

Looking east from the Elkhorns you see the higher Wallowa Mountains which form a high plataeu above treeline with individual peaks that rise up to 9,838′ (Sacajawea Peak). These peaks may not be 14ers but the threat from avalanche is to be taken serious as there have been several recent fatalities in this area. There are guide services that offer cool trips in the Wallowas.

A shutdown attempt on a cool line:

With no info about late season backcountry options I did things the old-fashion way, by looking at the range from a distance, choosing what looked cool to ski, then trying to get up it. I picked a summit with great steep aesthetic lines on the east face. I spoke with a local on an ATV coming down about the area above. He described a beautiful quiet place with great alpine cliffs, mountain goats, and pristine lakes. Sounds cool, let’s get up there, I was psyched.

I was attempting to do a descent from a peak I won’t name here. I won’t name it not because it hasn’t been skied before and I’m “saving it”, there are locals over the years who’ve done a lot of lines here. I’d just like not have the same spot beat down by outsiders, the area is sensitive to access being lost.

Get a map, check out satellite imagery and do it right. Spread out, do your own thing. This is a good range for that, and it is also a range with sensitive land issues, so it isn’t hard to wear out your welcome. The drama of the Crazy Mountains in Montana is something that can threaten access in similar ranges ringed by private land.

This area of the Elkhorns is the domain of hunters who use the rough forest road to try to get up and into the area. With a solid 8” of clearance I can get into a lot of difficult places, but I could not here, I’d have to walk from here. Unfortunately I didn’t budget the time to walk the rough road for a bunch of miles. It was time to go to plan B and search for another objective for the day. A lot of time was lost scouting peaks from a distance in the morning, so the plan would have to involve less mileage and vertical. Time to hit Anthony Lakes where a road gets you up high, some say its the highest road in Oregon, but I can’t confirm it. That means getting up to the late season snow.

Like a miniature Sierra Nevada but it’s called the Little Alps?

I moved north to where a paved road cuts across the range, giving closer access to peaks. I had no idea what would be there, would the day be wasted searching for lines in thick woods?

As I climbed a fun set of peaks unfolded one by one. Small steep peaks with pointed summits and at least one steep chute each came into view to the south. 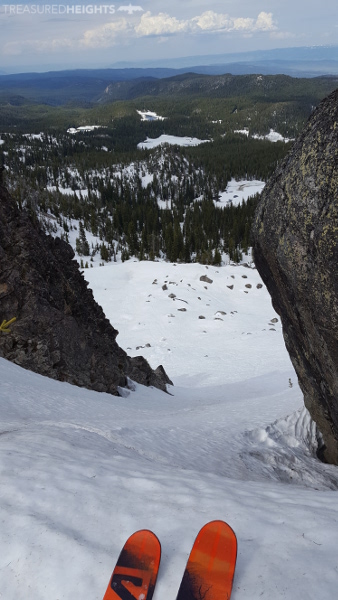 The northern part of this range has twisted old trees, naturally spread apart and when combined with the rocky mini-peaks the area reminded me of the Sierra Nevada close to Lake Tahoe. If you are fit and have the time you can ski from one small peak to another, knocking off cool steep lines.

A number of good peaks surrounded the valley, all short, it’s like going to an all-you-can eat buffet filled with mini-sandwiches, so tasty, and where do I start?   I had no topo map of the area, which is very unusual for me, and I just set course for a few peaks in the distance using only memory of the visual layout of the valley which I could see.

A fun land of chutes:

Not much later in the day I rounded the ridge, edging into icy steep snow toward the rocky summit. I took off skis and scrambled up the granite double horn. By the looks of it this was a popular short summer hike. Off season I had the place to myself. This stubby rock horn gave me the view I wanted looking into the heart of the Elkhorn Mountains to the south. I saw a plethora of beautiful ski terrain on 35-45 degree slopes through sparse forests. There are a few rocky summits with cool steeper lines. To the east the Wallowa Mountains were visible. While the Wallowa Mountains offered many more higher peaks, the Elkhorns have a green and inviting feel.

I set up above the chute and dropped in, getting some great turns before shooting out across a buried talus slope. From here I skinned up another peak and dropped that. The car was hot in the late spring sun, and it was time to move on and say goodbye to these empty peaks. Well, not entirely empty, there was one maintenance guy with his dog doing some work.

Anthony Lakes Ski Area is the largest ski area in eastern Oregon although it is quite small. The backcountry skiing in the region is the main reason to visit if you’re an advanced skier, the ski area is not far from fun wild turns and it might be a good place to go with a larger group, where part of the group and stay on the groomed while you can ski in the wild in view of the handful of trails on the other side of the valley.

In addition to the Elkhorns are a few other ranges around Eastern Oregon, they all look worth checking out.

More about the Skiing States Series by Treasured Heights: