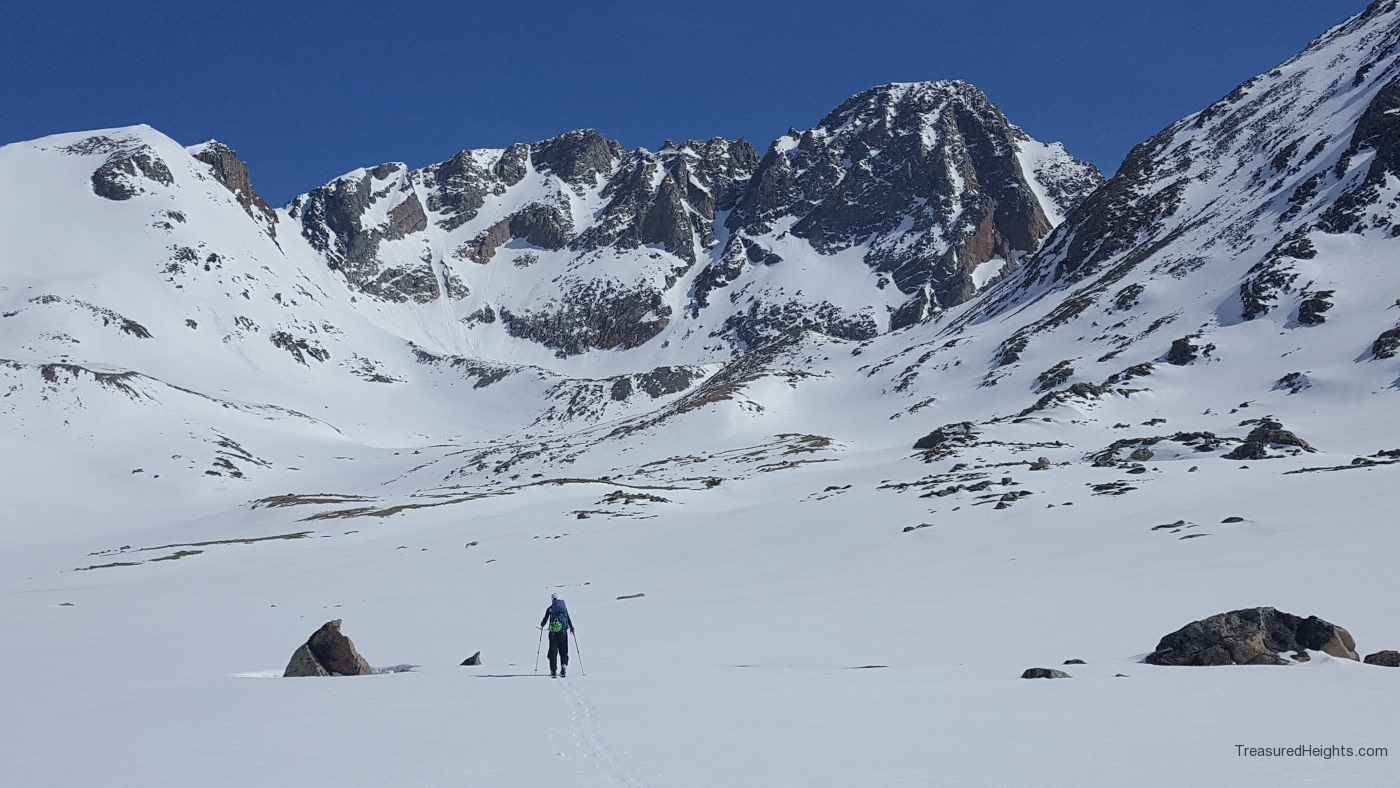 Skiing the state high points has been an ongoing adventure with many obstacles and difficulties, and Montana’s high point holds true to the spirit of adventure, as well as reinforces the state’s reputation for epic wilderness.

No beta, bad weather, rugged bushwhacks, long distance and big hungry bears waking up from hibernation guard Montana’s Granite Peak. To to add to this, the gnarly steep skiing on poor quality snow on the peak’s only proper ski route ensures that this peak will never be popular. While 12,808’ above sea level may not seem high compared with Colorado or California, the peak is harder than 95% of 14ers and is rarely skied. For me this is the last of the 24 snowy-state high points that I have not attempted yet.

The first known proper descent of the Granite Peak is probably the 2013 descent by a local, and even that may not be “proper” as it probably used motorized assistance (a snowmobile to knock off the long approach), some locals seem to view it as necessary. I disagree, it is totally possible to make this a pure human-powered experience.

I assumed the peak would be similar to Gannett Peak, just shorter mileage. At “only” about 30 miles round trip the peak can be done in 2 or 3 days if conditions are ideal. I scheduled 5 days to “ensure” success. (Ha ha ha!) I schedule the trip at the same time of year as the very successful Wyoming high point trip the year before. I trained with about the same 70,000 human-powered vertical feet prior to the trip, just like the year before. The trip would not be like the previous year!

We’d plan this year on skiing with no sled, trying to do it in 3 days, and if we failed, we could have two more days to make attempts or wait out weather.

A Bear of a Peak:

The Beartooth Mountains are north of a cinematically epic looking valley in the Northeast corner of Yellowstone National Park. The peaks sit mostly on a high plateau. Rugged, steep, V-shaped ravines act as barriers to getting up onto the plateau in many places. 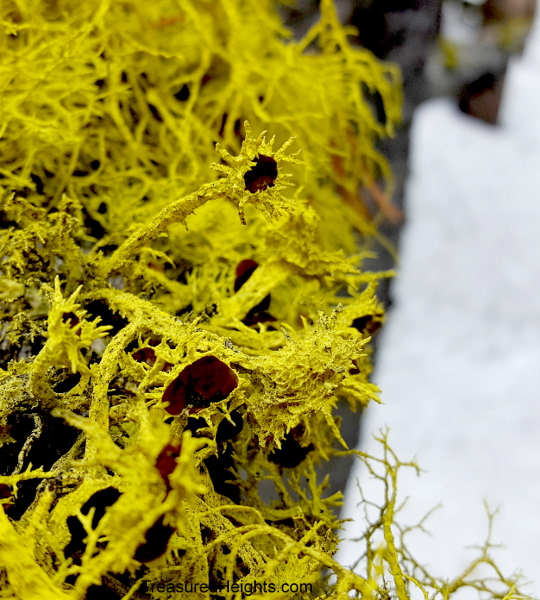 According to the rangers I spoke with there are many grizzly bear dens here along the routes to Granite Peak. The area is more dense with bears than the approach to Wyoming’s high point in the Wind River Range so we’d have to use extra caution. In a recent video shoot in Montana long time pro-snowboarder Jeremy Jones mentioned being more afraid of bears than steep skiing. I was no different. There was a lot of stress leading up to the trip as I’m not familiar with dealing with this apex predator.

On day one we skinned up Lulu Pass Road for 2 miles until the summer trail for Aero Lakes splits off to the right. Since hiking trails in the mountain West are poorly managed, you won’t find any trail markers on trees, so once you have snow on the ground the trail disappears. I can’t stress enough the importance of navigation skills, or having someone in your group that has it. Gannett and Granite Peaks of Wyoming and Montana are purely a bushwhack in winter. We navigated to Lady of the Lake which was reminiscent of Adirondack lakes. The sun was cooking us and clouds gave hope that it would give some relief.

We climbed over a wooded ridge and dropped into another valley. It was early enough (May 13) that there were plenty of snow bridges over the creek. As we bushwhacked with aching backs in slushy snow we called out constantly to alert bears of our existence. Most bears are defensive when surprised, and this gives them a chance to move out-of-the-way. Singing and yelling we worked our way through wild forest filled with rabbits, porcupines and insects laying dormant or dead on top of the snow.

Following Sky Top Creek we entered a V-shaped ravine with plenty of cliffs. The north side was ugly, with steep drops, wet unstable snow ready to carry us down into the ravine over cliffs. We traversed here. We had to push on to the flat areas above because camping here was unsuitable. After 7 miles we arrived at the first option for camping and stayed there. We hoped ideally to reach 10 miles in, which would put us in position for a 10 mile summit day.  Instead we faced a 15 mile summit day. The cliffs we encountered were small enough to not be on the topo maps, but big enough to be a problem. These ravines were narrow, with steep sidehilling above dangerous water holes.

Granite Peak is the unhappy medium between Gannett’s 5 day trip structure and a normal day trip. It generally takes a full day to travel 6-8 miles in difficult terrain with a heavy overnight pack. That still puts you too far for good summit day. We had a 7.5 mile approach before even starting the steep boot pack up the SW couloir. On summit day we skinned up through more ravines. Ski crampons would be necessary here if the snow was more frozen, but it only froze enough to make a crust that could be stomped on the sidehills.

After a few miles we finally broke out to a beautiful morning view and the high plateau. Lakes here were frozen enough to cross and we had more miles to go before the 90 degree turn in the valley.

After climbing up a pass we got the first views of the mountain. It was an intimidating hulk of crumbly granite. We still had MORE miles to go. While no one has written about skiing this peak online with any detail, one thing the summer users and rangers told me is watch out for the rockfall situation. With many mixed gullies above our couloir, rocks start funneling onto the route early after the sun hits it. At this point with the peak still 3 miles away and the sun beginning to beat on it my hopes were sinking. But, we allocated a few days for re-tries on the peak so it should be good, no?

We opted to ski up to the last bulge below the 1600’ steep face and get beta pics, pics you can’t find online of the route. The nasty granite slab that sits below the start of the couloir was heating up and the thought of it wet sliding was the real killer of the summit plan that day. Maybe 10 minutes after killing the summit plan we noticed nasty storms to the west already darkening the peaks.

We enjoyed the patch of sun and aired the stinky feet. My feet were already in pain after 14 miles of travel in here from the car, half of which involved a heavy pack. In the “hardest” state highpoints like Gannett Pk, WY and Mount Rainier, WA I had a recipe for success through building in a rest afternoon prior to the summit day. Allowing the feet to recover and getting to bed early at 6 or 7pm made everyone stronger for summit day. Here at Granite we did not have proper recovery time and this effected the start time and speed of travel.

We got hit with the storm on the way back. The slushy snow was rain-soaked from the past week of rain and the afternoon temps. We squeezed in cooking before a sustained soaking rain. Trapped in the tent, surrounded by killer hypothermic wetness outside we hoped it would stop. When it didn’t, I was thinking of the issue of flash flooding due to ice dams building/breaking. I heard the explosive booms of cornices coming down into the ravine at night.

The next morning ice-rain coated the gear, the peaks were already clouded in. Our idea of a second attempt today was gone. Unlike Gannett which had daily precipitation in the form of snow, in the week ahead temps would only grow warmer with more cloud cover. Nothing is worse than cold rain, and streams were rapidly loosing their snow bridges. With our route involving mandatory crossings of streams we opted to escape and salvage the remaining days of the trip.

Back in Cooke City we spoke with locals who talked about how the weather is unpredictable and crazy in this basin. Some storms never make it in here because they get hung up on peaks to the West, and sometimes storms get trapped in here and it’ll dump 4 feet of snow with no warning. 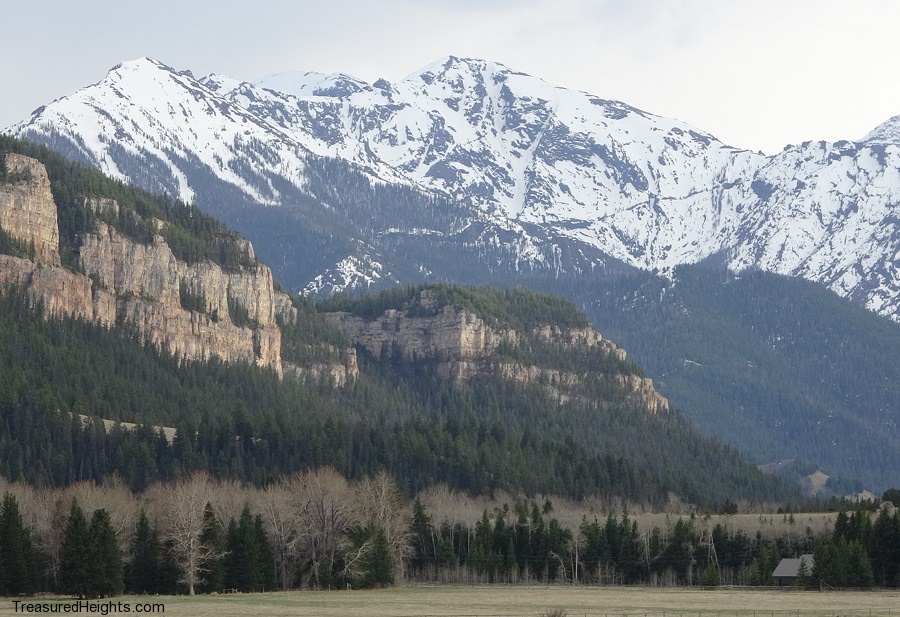 Since we didn’t use up the 5 planned days in the Beartooths doing Granite’s summit and other adjacent nice descents, we used up the other days skiing in the Absaroka Range of Wyoming instead. This landscape of 10-11k’ peaks is very wild and has endless ski lines.

The peaks of the Absarokas don’t stick out on maps the way the Wind Rivers do, however they have very challenging lines with 2-4,000+ vert of steep tough bushwhacks. We scouted a lot of areas by driving, and were able to fit in two days of day trips on shorter approach peaks including Top Notch and Two Oceans Mountain. These are popular among locals backcountry skiers. What constitutes “popular” in this region is still empty compared with Colorado hot spots.

The adventure to Granite was a full value exploration of an area with no winter beta and tough conditions. I look forward to the ability to precisely plan next year’s journey and do it during a larger block of sunny weather. If you get a chance to ski in the Beartooths or Absarokas, you should. These are the last remnants of the great wildernesses of the west, and you can’t beat the after ski activities, like hanging out with buffalo. 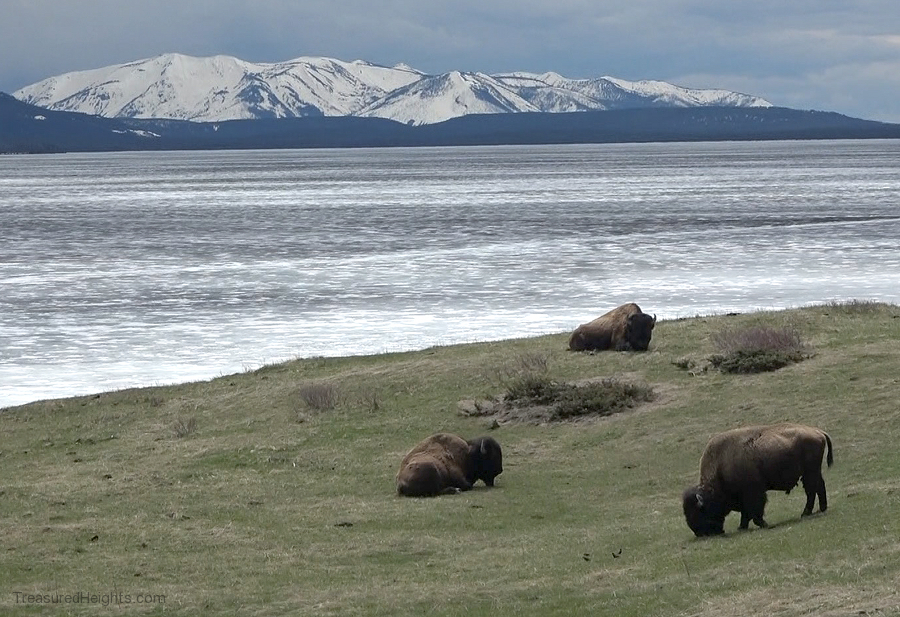 Skiing in the Wind River Range – about Gannett and the Winds >