Kings Peak, Utah is in the top 4 most difficult state high points. June 2019 was my third attempt on the peak, and instead of trekking 36 brutal cold miles in Utah’s greatest wilderness area, I thought I’d give the summer approach a try, it would only be 28 miles. Would the third time be the last time?

Two years ago I made a solo attempt on the peak in winter, after that I made a second attempt with the Swanson brothers annual Kings Peak Ski as part of the Wasatch Mountain Club event. The first attempt was quashed by making the mistake of trying to load the peak into one single day with a return to camp, the second attempt was blocked by bad weather. See the first article about the first trip here.

Summer skiing in the Uintas:

The summer plan to ski Kings involves shaving off 3+ miles by starting from the Henry’s Fork trailhead, something not accessible in winter. On the negative there’d be a whole lot of walking on bare ground to get to snow. Or so I thought.

This year was an amazing year for snow and in late June I had late May conditions. The peaks from treeline up were in great shape, with most couloirs still smooth and not too damaged by avy debris. Despite this, the 7-8 miles of walking into Dollar Lake camping areas would be using hiking boots. It was not dry hiking, it was wet with new snow. With skis, ski boots and overnight gear my pack weighed 45 lbs. Without skis and boots the pack weight was 31 lbs. This is 19 lbs lighter than last month’s attempt on Montana’s high point which had 4 days of food and more cold weather gear.

Learn more about the boots used at Hagan Skimountaineering >

Learn more about my pack list in my next article: Packlist for summer ski backpacking >

Right: a porcupine in a tree on the way in. This was one of many types of wildlife I saw. The wide swampy valleys of the Uinta Mountains are fertile grounds for moose, elk, sheep, goats and other animals that depend on plant life and abundance of water. Beaver are active in the area and were first trapped by visitors in the 1830s. 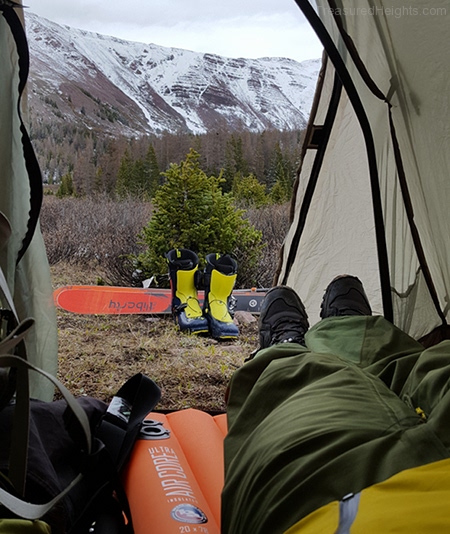 Four inches of new snow coated everything on June 22nd. Camp was set the next day as the snow burned off. On the way in I saw at least 5 moose, some elk, deer and other animals. The long flat approach valley is easy walking on a hiking trail with some difficult wet stream crossings. The main crossing over the Henry’s Fork does have a bridge, yay.

After the crossing the trail splits and is confusing, navigation is necessary here.

In 2017 I made the mistake of going in early, setting camp, and spontaneously deciding to try for the peak afterwards the same day to catch the only clear day. I got to mile 14 and had to come back to camp. The next day I tried again but was burnt. The lesson here was to chill and enjoy camp for an afternoon, saving strength for the summit day. On Rainier for example in 2014 having the rest day before the summit day allowed for success.

Another mistake made on the 2nd attempt at Kings was not waking up before 6am. This trip the wakeup time was 4:50am, starting to move at 6:20am. After a mile I hit enough snow to skin. Losing the 10 lbs of skis off my back was great. I reached Gunsight Pass and got the first view of the wild interior plateaus of the Uintas on the other side.

Rather than drop down and swing out to stay with lower angle terrain I opted to take the winter route to the right and go up one steep slope booting up to the final plateau. There it was, the final rockpile. It looked like only 700’ vertical however that was deceptive. It’s actually another 1500’ above the plateau.

I booted up the cone directly instead of using the roundabout ridge route. The ridge is better when you have higher avy danger, or if one is not used to steeper terrain. The summit gave excellent views.

After two anxious years of wanting to try again I’d made it. Getting to the top is nice, but getting to the top during warm clear conditions was even more important. I had time to enjoy the views and kick back. Not enough time however to read the Book of Mormon someone had left on the summit in a ratty plastic bag. So I put my skis on and started the descent. There was a bit of powder from the last storm, but most of the top was excellent corn.

On the next section I had to decide if I wanted to ski Anderson Pass, a spectacular gash in the peaks, or the more moderate wrap around route. Conditions were good for the steeper route. It’s north facing so it was more firm than the perfect corn, but it was still great. It was steeper than I imagined but well within my comfort zone at 35-45 degrees.

I got back to camp and relaxed in the sun a bit. Ahhhh, Skiing in May and June is so much better. Warm summits, safer avy conditions, sunshine and flipflops at camp. I hiked 7.5 mile out to make a 19 mile day. The level of soreness and mindless exhausted hiking at the end was huge, but Kings Peak has to earn its reputation as a hard peak somehow. The annoying fresh snow at the start of the trip was actually a blessing, only one day after it melted bugs invaded, lots of massive mosquitos. Just another reason to ski peaks, and avoid them in the hot season. 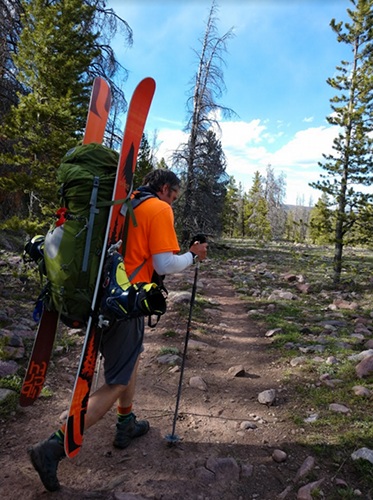 Time: late June
Starting elevation: 9,420′
Top elevation: 13,534′
Vertical rise: 4614′, includes 500′ of ups and downs, this is a lower number than the hiker stats as skiers can go directly down Anderson and skip the wrap around to Gunsight Pass on the way out.
First skiable snow 6/24: 11,000′
Skiable vertical: 2534′
Miles: 28 including deviations to avoid deep snow patches on the way in and out.

Land: The Uintas properly belong to the Ute people as formalized in 1861 by Abraham Lincoln. As predicted Mormon invaders backed by East Coast investors stole the Uinta Mountains from the Ute. It is worth noting that the Shoshone did use the lands north of the East-West divide in the Uintas. The Shoshone were attacked and dominated in order to establish a more secure route for the Oregon Trail which passes just to the north of the Uintas. In fact standing at historic Fort Bridger in Wyoming you look up and see the spectacular peaks of the Uintas. Today the Uintas are managed under the Ashley National Forest. The core of the land is mostly protected and the areas just outside Kings Peak’s trailhead are leased to oil companies which have been exploiting the area since Ronald Reagan played fast and loose with leasing in the 1980s.

More about the project: