For 107 years Mount Marcy has been an attraction for skiers. Most New York backcountry skiers today take their first wild turns on this peak. For me oddly, it took 10 years of skiing in the backcountry before I got around to standing on its dome summit, and it was totally worth the long haul in there.

New York’s highest point elusively melds in with a cluster of remote peaks far from any roads. While you can see its rounded alpine summit poking 600’ above the massif, its flanks blend in with a maze of other Adirondack 46ers (peaks above 4000’). The peak stands over a mile high at 5344’ above sea level, with a respectable 3200’ of vertical drop. The mountain is the 2nd most remote high point in the Northeast. I’d waited months for the ideal conditions to come and ski Marcy that year. I can remember there was nothing more pleasant than skiing on a deep spring snowpack in the warm sun of April in the Adirondacks and I was hoping conditions would be good.

The trail begins from the Adirondack Lodge and follows 2 miles of gradual uphill until the Marcy Dam. The dam and former lake is an important base camp and lunch spot for bears. The campers haul in the meals, then the bears come and eat whatever they want while the campers yell at them, it’s quite fun to watch in the summer. It’s also a launch point for all the surrounding peaks which include Algonquin, Phelps, Wright, Tabletop and Colden. These peaks are considered part of the 46ers list. In New York there is a popular goal to hike all 46 of the peaks above 4000′.

I was doing a solo ski on AT gear which included classic red Scarpa Denalis, Alpine Trekkers and some skinny 70 mm wide Hart skis.  Today, a decade later, in the age of carbon fiber boots most people would find the setup too heavy. At the time it worked just fine and allowed for a way to cheaply develop a quiver of 10 alpine skis of different widths and lengths for any occasion. This is because Alpine Trekkers pop into any alpine ski binding and allow you to lift your heel for the climb. When you’re done you pop them out of the binding and put them in your backpack along with skins. Almost no one uses these anymore.

From Marcy Dam I began to follow the trail in the direction of Phelps Mountain. The trail here is very narrow and gets funky when people are racing down at high speed. This is a place where you can witness slowshoers freak out and scatter like bowling pins when a skier comes down. Since the 1973 management plans were passed they failed to create a designation for the existing backcountry ski trails in the park. Some spots like this really need to be widened or split to have skier and snowshoer traffic separated. The Adirondack Powder Skier Association has been working on this effort in the last decade.  On this April day, like many weekdays in the Adirondacks, the trail was empty, so I didn’t have to worry about being the bowling ball or the pin.

After a bridge crossing an actual separate ski trail began and I followed skin tracks up the 700’ of vertical to Indian Falls.  This section below Indian Falls generously winds back and forth and has glade sections. Snowshoers are not supposed to use this section, they have their own narrow trail, however other times I’ve seen people not respecting the trail rules and creating a two-snowshoe wide trench right in the middle of the ski trail. Even worst that are the “postholers”. While in Colorado and Washington State I see it all the time, in the High Peaks Region of the Adirondacks people will give you some serious beef for puncturing boot holes in their trail. I’d consider the Adirondacks ahead of National Forest as postholing is dangerous and destroys precious narrow trailspace. Random 3′ deep holes in a smooth trail surface can ruin the smooth flow for snowshoers and cause skiers to fall. Unlike National Forest it’s actually a law in the Adirondacks High Peaks Wilderness that you must carry snowshoes or skis when snow is over 8″ deep.

The mental side of things:

Mount Marcy is a long ski, so your mind needs to compartmentalize the sections to allow you to move forward and measure progress. There is the first 2 miles of flat, then 1.5 miles up Phelps Brook, than .75 miles to Indian Falls, and so on. On the East Coast you don’t have constant views to give you a check on your progress. Hiking and skiing in the East can really develop character as there can be a lot of vertical gain without rewards of views until treeline. I’d say it’s more mental than Western skiing, with the exception of things like the Emmons Glacier route on Rainier. That was a mentally taxing to trudge up a white featureless staircase for thousands of feet with no clear markers of progress. Marcy is not as taxing as some of the eastern peaks because there are these clear sections of the journey and some views that break up the trip. Popping out of the woods at Indian Falls gives a refreshing view of Algonquin and Wright Peak.

The next mile of trail brought me to a ridge where I could finally see the summit cone. The cone looks significantly bigger when you’re this close. This short steep north face can have some skiing on good years. Another half mile brought me to the beginning of the reward for the journey: the treeline. On a good snow year such as this (when Whiteface Mountain got 265”) 5-8’ of snowpack buries and shortens the stunted trees. This has an effect of lowering treeline for us skiers. I could clearly see the Northeastern bowl coming off the summit. This mellow bowl can have sweet powder and is really the plum of the entire ski.

I skinned up the final approach and as I rounded the summit there I saw a guy. I hadn’t seen a single person the whole day and here, 8 miles from any road, there was another skier. We talked and his name was Phil Brown. He is the editor for Adirondack Explorer and was also out on a solo ski of Marcy. He’d been up in many different conditions before. For me this was the first time and the view was intense. I could look deep into the most wild parts of these peaks. Haystack looked awesome, Colden’s eastern slides looked amazing.We took off down the bowl and ridges. Rime ice on the surface effortlessly shattered like crystal champagne glasses and the skis turned perfectly on the firm spring snow below.

The little amphitheater formation is a good place to do laps and often stay protected from the wind, however today it’d be a straight ski out. The winds sculpted drifts around the summit so you could choose how you wanted the snow, going up onto the ridge for more firm snow, or into the bowl for protected lobes of powder.

The trail zigged and zagged, and despite being in the woods, often had views of Big Slide or other peaks. The ski trail dived down off the shoulder and back to Indian Falls. The next section to Phelps brook was really fun and had some wide parts where you’d have room to play and jump off of lumps in the trail.

Mount Marcy is a classic old ski trail into a spectacular place. Before trying it make sure your boots won’t give you blisters as the long approach is a good test of how well your boots fit. If you are new to backcountry I’d recommend stopping in at the Mountaineer in Keene Valley to get fitted properly with a the right boot. Marcy’s bowl and trail route is not steep, but has a consistent downhill. There are some near flat sections but if you maintain speed you can bust through. Grand Central route and other routes into Panther Gorge can get gnarly and avy prone.

Splitboarding: There are other peaks in the Adirondacks which suit splitboarding much better, this being said every splitboarder I’ve spoken to has had a good time and knew what to expect.

Avalanches can and do occur in the Adirondacks. Mount Marcy via the main route is low enough angle that avalanches are not a problem usually. Skiing into the bowl 30’ to the right could have some danger. Grand Central and other lines coming off the peak into Panther Gorge can be extremely dangerous as there are a lot of terrain traps. The Adirondacks don’t have a sanctioned avalanche forecasts. Learn more about this on our article Backcountry Skiing in the Adirondacks.

Here is a condensed video of the ascent and descent of Marcy in ideal conditions:

Backcountry Skiing in the Adirondacks 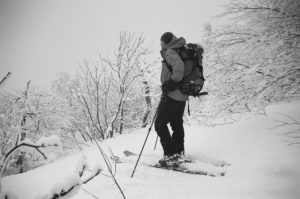 See a weekly stream of photos from Treasured Heights of backcountry skiing or splitboarding around the US on Facebook or Instagram.