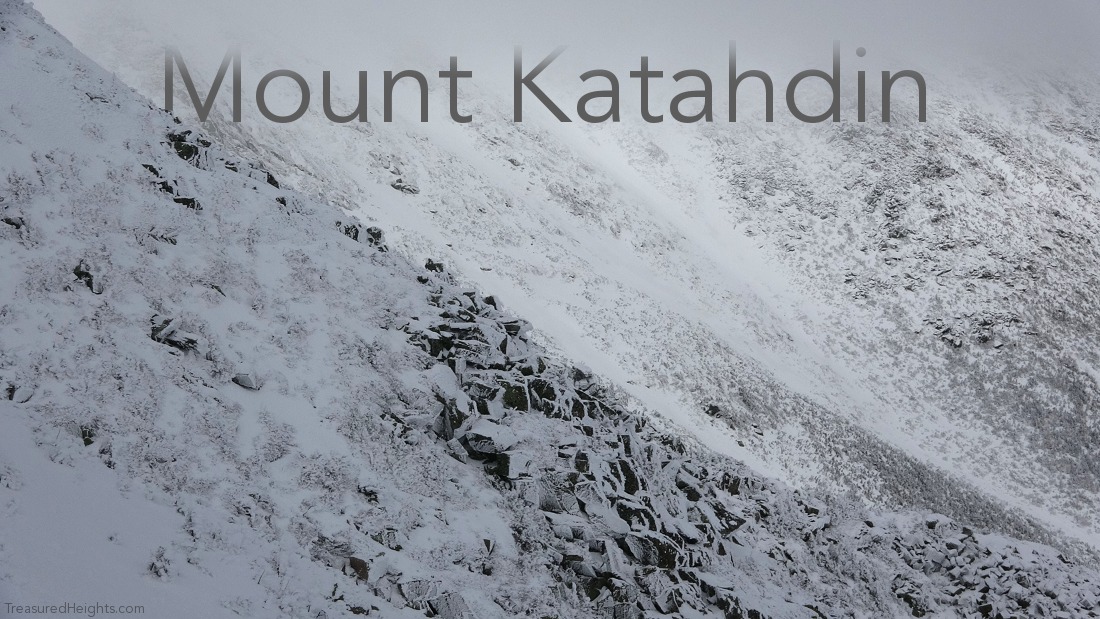 Looking at the low grey skies around us there was no doubt that Katahdin was not going to serve up it’s good side for us. Despite this, seeing the plethora of skiable gullies on Hamlin and Baxter Peak itself was quite exciting. The peak has all of the same exciting steeps and bowls as any Western peak. Katahdin was the last summit of the Northeastern high points in the Skiing States project, and it was by far the hardest. 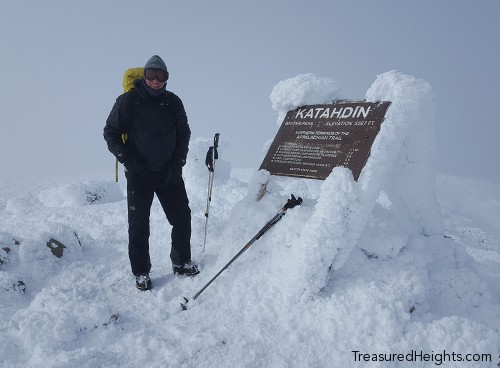 When you stand on the summit 19 miles from your car, you know you are on the most remote of high points in the eastern United States. No trip to Katahdin for normal people is shorter than 3 days. But why would you want to rush your experience on the most beautiful peak in the East? The peak has many cirques and more than 40 distinct  gullies and couloirs. The place is a skier’s paradise, and yet few backcountry skiers you speak to from Lake Placid to Cape Cod, to Philadelphia have skied there.

Mt. Katahdin was first climbed by Abenaki or earlier native people. The first settlers to ascend the peak did so in 1804 with the assistance of two Abenaki guides among the 10 member team.

We skied Katahdin in early March of 2018 just before a series of Noreaster storms walloped the peak. Despite thin snowpack compared to normal there was still a ton of great skiing. Avy danger was elevated when we skied there due to a thaw with rain that created an ice crust. About 8 heavy inches of new snow covered the ugly hard layer, making the skiing still fun. 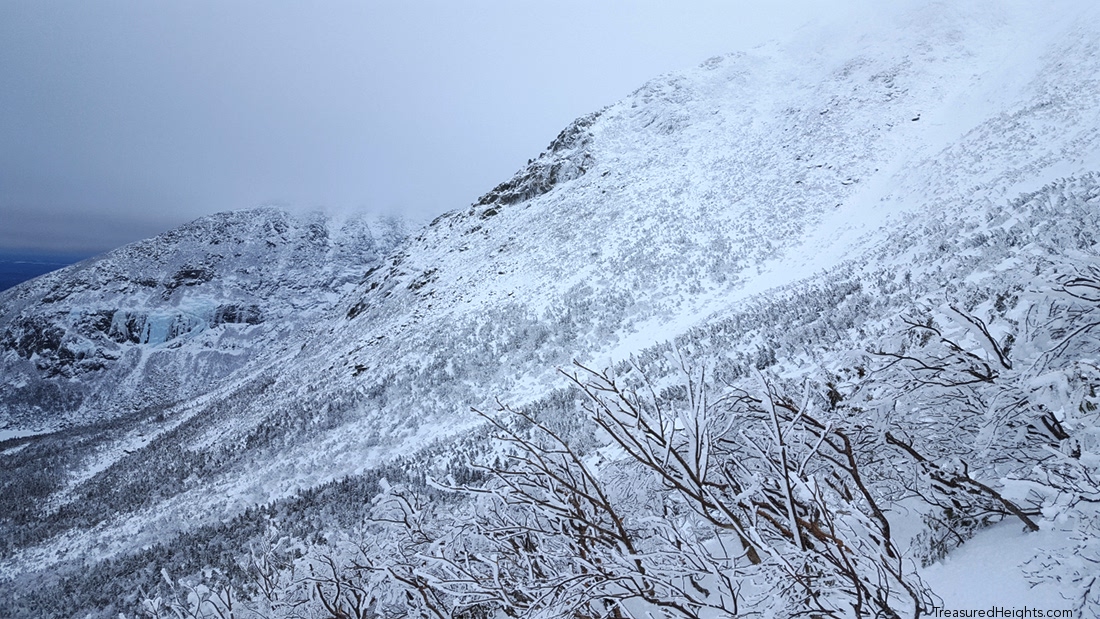 March is the best month to ski Katahdin for two reasons. First, more snow falls in February and March than in other winter months. And second the insane level of red tape required to access the park in winter have cut off skiing after March 31st.

Planning the 13.5 miles to basecamp:

Most parties drag sleds into a “basecamp”. It is about 13 miles from Abol Bridge parking lot into Roaring Brook Campground, and another few miles up to Chimney Pond bunkhouse. On icy snowmobile-packed roads you can drag 55 pounds of gear with little effort using a sled, it’ll take 5-7 hours to get in if you’re fit. If the ranger hasn’t done his daily in and out on the snowmobile yet you may be breaking trail in deep snow, so the way in could take 12 hours, plan accordingly. 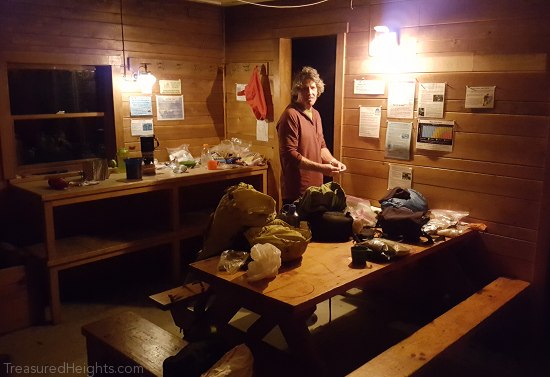 There are many systems of sleds to choose. We chose to have one sled with mutual and heavy gear with a simple X configuration of PVC pipe and duct tape. You can drag the sled by skiing on your skins up, or walking on the packed snowmobile trail with hiking boots if the snow is not deep. Walking in regular comfortable boots is a great relief compared with plastic boots. Bring both. Light flip flops are great to bring too for walking around the bunkhouses.

Going in vs. going out:

Going in has both ups and downs, but we kept the skins on the whole way as the downhills are not long enough to pull. We could have hiked in boots as the trail was packed ice. In going out we skied with skins for the first 2 miles from Roaring Brook to a high ridge where we know it would be only downhill for the following 6 miles (use your topo map to figure out where to do this). We pulled skins at that point and had a pleasant glide mostly down to the tollhouse. From the Tollhouse we loaded the skis and heavy plastic boots on the sled and walked the next 4 miles on packed road. In good weather it was no problem.

It was almost 40 miles up and down the peak in 3 days. It’s recommended you train for Katahdin ahead of time by doing other long days. Day trips like Allen or Cliff Mountain in the Adirondacks are great options. Small problems that may not stop your day trips like an inflamed knee can lead to a rescue if your far in. Bringing and extra day’s food helps in case you get stuck at the bunkhouse in bad weather, or need to let injuries get better before doing the long haul out.

Ski Routes on the mountain

Katahdin has great terrain. Plan your route based on weather. For the Liberty Skis Northeastern Tour we chose the Saddle Slide route for two reasons: it had the lowest avy danger at the time, and it was the historic 1927 first descent route. In the Skiing States Series project I’ve been hitting peaks by their historic first descent lines. We were hoping to do laps and ski the longer gully to the south of Saddle as well but avy conditions changed that.

Famous for the red tape:

While Katahdin may be unusually remote for Eastern peaks, it is ordinary compared with remote peaks in the San Juans, Uintas, Wind Rivers and other ranges in the West. Baxter State Park has a bizarre level of regulation which requires winter users to register before visiting, pay fees for use of leantos or bunkhouses even if you don’t want to. Solo winter visitors have to fill out extra paperwork. This regulation is because the peak is a form of private reserve, and the State Park part of the name is not indicative of beind subject to regular state park rules.

The good part of red tape:

As we see from the shitshow on Mount Washington, Mount Rainier and other prominent spots, hordes throw themselves at the mountains without proper training or gear and rescues are common. Washington’s prominence as the highest in the Northeast makes it a magnet for ambitious and unprepared winter users. Katahdin is just as dangerous as Washington in the winter but the combination of distance and regulations thins out crowds to people who take the mountain more seriously.

The ranger always stationed at Chimney Pond is able to personally greet and question almost every visitor. He or she informally gets a good idea of each group leader’s level of experience by how they respond to his questions. He or she will keep track of your progress, knows what route you plan to go on and he’s got snowmobiles and great infrastructure for rescuing visitors. I’ve never seen such a personal touch to land management. Another good thing about the setup is that the bunkhouses are awesome for skiing or ice climbing for multiple days. There is a woodstove, wood supplied and plenty of room to dry your wet gear.

Encouraging visitors to have a list of gear for winter is not a bad thing. When we have a rising segment of mountain users copying irresponsible users like Kilian Jornet who travel without extra clothes, no avy gear, and improper footwear on snowy slopes it’s refreshing to see land managers say or do something.

The other side of red tape:

The worst part about Baxter’s regulations is it forces skiers to ski before April 1st, when avalanches are more likely. April and May skiing is safer. In Colorado, New Mexico, Wyoming, etc. steep lines on the high peaks are usually not skied until April-June, and this far north in Maine they’ve got snow which is almost similar in terms of seasons and snowfall totals.

The other bad thing about the reservation system is it encourages skiers to ski in unsafe conditions. By having to reserve your stay ahead of time you are more prone to feeling pressure to ski during stormy weather when you’d normally just bail on the trip or slide the trip a few days to better weather before or after the storms.

At Baxter much of the time you cannot casually slide your schedule. Since spaces are limited in the bunkhouses the days are often booked up, so you will need to bring a tent/s in there if you slide your days. This is not a huge problem though. Once you’ve sent in the paper forms and payment by mail, you can call them up and with credit card change the reservation.  You may need to move out of the bunkhouse and in to leantos, which is still comfy compared with remote peaks out west.

Tips for reserving your trip to Mount Katahdin:

In the last few years Baxter has relaxed its regulations on solo travelers and the requirements to carry an ax for chopping wood (yes, it was required!). I recommend you go to the official site listed below, not other outdated sites which still list the old regulations. Make sure you try to do the reservation at least 2 weeks ahead of time since they need time to receive stuff in the mail. Two weeks is not close enough to allow you to do your trip based on the weather forecast. Like the AMC huts weekends get booked up far ahead of time.

Katahdin has the best snowpack in the East in terms of quantity (excluding the microclimate of Tuckerman Ravine’s bowl). In the 2018 high point tour for Liberty Skis we covered all of the New England high points from Massachusetts to Maine. Baxter State Park clearly had the best snowpack with 1 foot at the lowest elevation, and a solid 3-5 feet at Chimney Pond. Mount Washington area had almost no snow at Jackson, NH, and the Stowe valley had just inches. Expect an awesome winter wonderland at Katahdin.

Ski Season: Baxter State Park only allows skiing until March 31st. See the paragraphs above for details.
Names: Baxter Peak, Mount Katahdin
Land: Baxter State Park and Katahdin Woods National Monument
Elevation: 5267’ (1605m)
Vertical: 4700-5700’ depending on approach. There are ups and downs on the way in that add vertical.
Access: Park on the south side of the road at the nondescript lot across from the Abol Bridge Campground & Store
Red tape: see the paragraphs earlier in this article.

Conservation issues: Anti-park attitude has existed at Baxter since it was created in the 20th century many residents of Millinocket are completely ungrateful for the economic benefit the park’s creation has made. Most have never lived in other economically dead logging towns so they are unaware of how bad life can get.

Ignorant old men harboring a bad attitude for lost hunting grounds on the mountain have passed the attitude down to younger generations. Other local residents have questioned the flawed mentality, however anti-public lands leaders like Ryan Zinke and Donald Trump have used local residents as tools to weaken protections for lands nationally and threatened to reduce or eliminate Katahdin Woods National Monument.

While Katahdin has not killed nearly as many people as Mount Washington, that is only because of the inaccessibility of the peak, so it gets a tiny fraction of the visitors. A ranger stationed at Chimney Pond will have the best information for you, however they are not skiers and may not have the body of tactile experiences that an experienced skier will have.

The Skiing States episode of Maine is out now here:

Subscribe to the YouTube channel to get news of when new state high point videos come out.