Exploring our nation, not necessarily skiing was the primary motive for the Skiing States project.

Back in 1998 as an enthusiastic kid in the snowy Northeast I picked up the book Wild Snow by Lou Dawson in an EMS book rack. It was my first book specifically on backcountry skiing and was a good general guide for learning about cool lines across the nation. In the book Lou had done research on Northeast highpoints. Having not skied anywhere outside of the Adirondacks and various obscure rural mountains in central NY I saw skiing the highpoints of the Northeast as a great way to sample new states I’d never been to in the winter.

After moving back from Europe in the 2000s, the idea of skiing highpoints came back and I skied more in the Northeast including memorable trips up Mount Marcy, Mount Washington and Mount Mansfield. I was one peak away from completing the Northeast (and no, Rhode Island and Jersey are not included). Katahdin remained the last real peak to be completed, but I moved to Colorado, leaving that on to be done 7 years later.

After moving to the American West, high point skiing didn’t seem as important as the new playground seemed more vast. The 14er skiing craze was taking hold in Colorado at this time. Chris Davenport had recently skied the 14ers many years after Lou Dawson, and his repeat was publicized well with high quality photos, video and this new thing called social media.

I watched as skiing the 14ers became a fad for locals and I didn’t see anyone coming up with interesting new goals.  I noticed an insular focus in the backcountry skiing community at the time. I had also seen this insular focus in the Northeast with focus on one range or one state. Having spent much of my life devoted to international study, language and geography I naturally could not connect with such an insular perspective, however I do appreciate how people love and care for their local region. What was clear is that repeating the 14ers project didn’t make any sense.

In 2012 I skied Mt. Elbert and kicked off the original goal to ski all of the Western state high points. I intended to publish a GoPro descent of each in a simple film project but held off on releasing videos or speaking about it publicly. Over the next few years I knocked off a few peaks each year, mixing it in with skiing other better quality lines. By 2014 I was shooting the entire journey on multiple cameras with the intention of making a small documentary on every state’s high point, something that had never been done outside of Mt.Rainier. Being alone on remote peaks was an epic experience, and it was also a testing ground physically and in terms of skills.

By 2017 I was close to finishing the western highpoints and began to talk about it. Soon, there were efforts by others to copy the idea. They rushed the western trip and pushed out product. I didn’t have sponsors, guides and teams of people following me as they did, but I kept plugging on. Shooting video alone did have limitations as far as the quality of production, and I was grateful for the times when I had a few friends accompany me. Being alone however, such as on Kings Peak Utah, many miles from any road, and many more miles from other people was a strong and beautiful experience. By the way, don’t ski alone, even though in skimountaineering history most of the first descents were done by solo explorers. Solo skiing in wilderness is an extra powerful experience, just like free-soloing in climbing, however I don’t recommend either. The plus side however is that your tolerance for risk is lower so you are more likely to call off a summit if the weather looks bad, the snow is funky, or your knee has some strange pain developing. Perhaps the risk level is the same as skiing with a group where judgement is clouded in a social safety net.

Skiing all 50 US State Highpoints, from intriguing to stupid:

It was clear this was a bad idea, not because it wasn’t interesting, but because achieving the southeastern states was incredibly expensive and stupid.  I thought about how rich people in my city with private jets and private drivers had went around hiking/running the state high points for speed records in the past, blowing $200,000 or more which could have gone to charity, or to conservation of the highpoints under threat. Their projects were a disgusting show of wealth to me, given I grew up among urban and rural poor and I’ve seen suffering, something they never bothered to stop and witness during their travel. A trust-fund powered circus was not the point, the point was a multi-faceted learning experience which could raise awareness for various issues affecting each region.

Cutting off the goal at the “snowy half” of the nation (24 states) made sense. These are states where people already do skiing in some form, they have history. The snowy half has reliable enough snow that using cheap road trips ($800 for the NW over 10 days)($150 in 3 days) I could pick off the peaks. In total the travel has cost less than $10k spread out over the years. That means if I was one of those rich dudes I’d have $190,000 left in my budget to divide among the Winter Wildlands Alliance, the Access Fund, Natives Outdoors, or the Sierra Club.

Overall the theme of the project has been to explore and appreciate the beauty everywhere. The last spot I haven’t skied at is Granite Peak, Montana, look forward to a film on that in 2019. You can satisfy your curiosity about your state’s high point, or the other spots through the listings at the main Skiing States page. If you are all about short videos the YouTube channel has the complete listing here.

Back to the main Skiing States Page >

Listing of videos of skiing the high points > 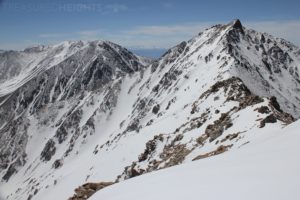 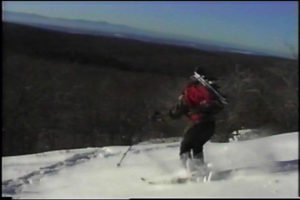